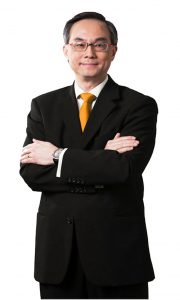 He is an Independent Director of SingHaiyi Group Ltd, Maitri Asset Management Private Ltd, and a Non-Executive Director and Chairman of Miclyn Express Offshore Limited. Currently, he serves on the Advisory Board for Wealth Management at the Singapore Management University and has been the Founding Chairman of a not-forprofit child development organization since 1991, as well as Chairman of the Nee Soon Link Citizens’ Consultative Committee. For his dedicated and commendable service rendered to the community, he was awarded the Pingat Bakti Masyarakat (PBM) Public Service Medal by the Government of Singapore in 2021. He is also a Mentor to a social enterprise involved in helping the marginalized women and youth-at-risk.

He has over 36 years of banking experience. He started his banking and finance career with the Monetary Authority of Singapore and went on to serve in the Corporate Banking Groups of various foreign banks. In 1989, he moved into private banking, where he held senior positions, including Global Market Head and Country Head for Citibank Private Bank Singapore and Managing Director (Investments) for Merrill Lynch International Bank Singapore. He also served as Chairman of IBF Private Banking Industry Workgroup and Member of IBF Standards Committee from 2016 to 2020. He was conferred a Fellow of the Institute of Banking and Finance in 2014.

He graduated with a Bachelor of Social Science (Honours in Economics) from the National University of Singapore in 1982.