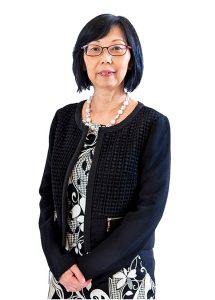 Ms. Lim Sian Choo joined the Group in 2011 as the Group Head of Corporate Secretarial Services and Corporate Social Responsibility. She currently serves as Chief Sustainability Officer of the Group since her appointment on 27 May 2020.

Since 2013, she has been working collectively with various stakeholders, including the RSPO, on various initiatives. She is an active member of the RSPO standing committee, working groups, and task force, and is also a member of the Complaints Panel.

She initiated her career in 1982 as a Chartered Accountant and was involved in the accounts and finance departments of various businesses. In 1991, she joined the Hong Leong Group of Malaysia, holding various capacities including Operations Manager, and prior to joining the Group, she was the Group Financial Controller up to 2011. In 2009, she also served as a NonExecutive Director and a member of the Audit Committee of Southern Steel Berhad.

She obtained a Bachelor of Commerce and Administration degree from Victoria University, Wellington, New Zealand, in 1981. She is a member of the Malaysian Institute of Accountants.