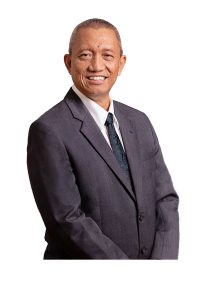 Mr. Witjaksana Darmosarkoro was appointed to the Board on 1 July 2021. His current role has been with the Secretariat of Council of Palm Oil Producing Countries (CPOPC) in Jakarta, where he is the Director of Sustainability and Smallholders Development.

He began his career in 1984 as a researcher at the Agronomy Division in the Coconut Research Center in North Sumatra, Indonesia. In 1990, he became the Head of the R&D Planning Section at the Soil Science and Agronomy Division of Marihat Research Station. From 2005 to 2014, he was the Director of Indonesian Oil Palm Research Institute (IOPRI), followed by his role as the

Director for Replanting and Farmer Support at the Indonesia Estate Crop Fund (BPDPKS) from 2015 to 2016. He is an eminent Agronomy and Technical Advisor, having rendered his expertise to numerous oil palm companies throughout the years.

He obtained a Bachelor’s degree in Soil Science and Master of Agronomy from Bogor Agricultural University, Indonesia, in 1983 and 1991, respectively. He holds a PhD from Iowa State University, USA, in Crop Production and Physiology in 1997.